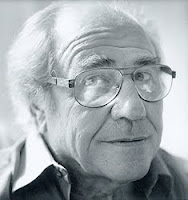 Recently Semiotext(e) has reissued several of the late Jean Baudrillard's pamphlets from the 70s and 80s as part of a series called "A History of the Present". I've read three of them over the past few months: Forget Foucault, In the Shadow of the Silent Majorities, and Fatal Strategies. Two things by way of beginning: first, generally speaking the introductions by commentators added much to my experience of reading the texts. Baudrillard's writing is notoriously allusive and mind-numbingly repetitive in places; a friend of mine recently commented that reading him was not unlike reading a mediocre first-year undergrad essay, since much of it is uncited vaguaries and unsupported claims in a froth of redundancy. Since I'm sympathetic to this view, I have to say that having a theoretical overview at the beginning of each text is much appreciated - though it appears, in my opinion, that the commentators are at times overly sympathetic. Second, I implore Semiotext(e) to get better copy editors. The reissued pamphlets are littered with typos, as well as asterisks on foreign language words which do not point to any explanations of the words. And I shit you not, the reissue of In the Shadow of the Silent Majorities contains a paragraph which just breaks off mid sentence.

If publishing trends are any indication, Baudrillard still appears to command a fair bit of attention in North America. This despite his disappointing, confusing and to many people offensive weigh-in on the events of 9/11 (The Spirit of Terrorism, Verso), and, more importantly, the fact that nobody in France ever really bought much into him in the first place (Deleuze even once quipped that Baudrillard was "the shame of the profession"). So what gives?

I think on some level Baudrillard speaks to a need that is deeply felt in North America. Theoretically speaking he's actually not that hard to crack; the problem is that he writes in a manner contemptuous of his audience. He assumes we all know a thing or two about Bataille, Mauss, Levi-Strauss, Freud, Jarry, Marx, symbolic exchange, pataphysics, and so on. To be fair, we should indeed have a good grasp of these if we want to engage seriously in so-called French Theory; casual readers, however, will be highly frustrated by what will appear to be pompous nonsense.

So what, then, is the kernal of Baudrillard's later theory? What the pamphlets in question wager is that capitalism has reached a metastatic cancer stage of post- or trans-political administration. There being no alternative to capitalism (and in any case no revolutionary subject to usher in such a change), there is properly speaking no more critical theory. There is only the "fatal" theory that banks on things imploding under their own weight. Baudrillard takes the position of a theorist who ups the ante of late or "postmodern" capitalism and advances hypotheses about its own terminal logic. Speaking in terms of symbolic exchange - e.g. the agonistic ritual of potlach - he gives the gift of extreme theory by way of contributing to provoking the counter-gift of the system's own collapse (i.e. he is a kind of "terrorist" - cue his bizarre response to 9/11). There is a perverse kind of hope in Baudrillard: one which is attuned to the day after the apocalypse. Abandon Marxism all ye who enter.

I think that this touches off something profound in a society that is sick with surplus value, but which sees no real alternative to capitalism. In a society that churns out apocalypse culture, it is easy to interpret Baudrillard's ideas as flirtations with the hope that the whole thing will just crumble, come what may. In the last two decades of his life, especially, he can be read as a kind of ironist of the apocalypse. Virtually any one of his books will provide a good enough entering wedge into what he is doing, since all he does at bottom is repeat that there is nothing to be done but ride out the end.

So my advice: if interested, pick up any one of his books, see how he does it, and move on. Solidarity with emancipatory currents in the global South, for example, presupposes more than and in all likelihod rules out the fatal theory of disillusioned Marxists.
Posted by Matt McLennan at 3:52 PM

The Notes Taken is a collaborative blog dedicated to book reviews and occasional rants. We would like to present an informal venue to discuss and debate recent, and sometimes not so recent, literature in philosophy, politics, and fiction.