The Philosophy of Antifascism: Resources

I no longer blog thanks to Twitter, teaching and other commitments. However, I will dedicate--and hopefully continue to update--this post as a resource guide to my writings on antifascism around and related to the core contribution to the project, The Philosophy of Antifascism: Punching Nazis and Fighting White Supremacy (Rowman and Littlefield, 2020). 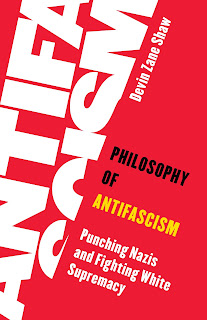 On January 20th, 2017, during an interview on the streets of Washington D.C., white nationalist Richard Spencer was punched by an anonymous antifascist. The moment was caught on video and quickly went viral, and soon “punching Nazis” was a topic of heated public debate. How might this kind of militant action be conceived of, or justified, philosophically? Can we find a deep commitment to antifascism in the history of philosophy?

Through the existentialism of Simone de Beauvoir, with some reference to Fanon and Sartre, this book identifies the philosophical reasons for the political action being enacted by contemporary antifascists. In addition, using the work of Jacques Rancière, it argues that the alt-right and the far right aren’t a kind of politics at all, but rather forms of parapolitical and paramilitary mobilization aimed at re-entrenching the power of the state and capital.

Devin Shaw argues that in order to resist fascist mobilization, contemporary movements find a diversity of tactics more useful than principled nonviolence. Antifascism must focus on the systemic causes of the re-emergence of fascism, and thus must fight capital accumulation and the underlying white supremacism. Providing new, incisive interpretations of Beauvoir, existentialism, and Rancière, he makes the case for organizing a broader militant movement against fascism.

Purchase Philosophy of Antifascism at leftwingbooks.net (here) and receive a free copy of the pamphlet The Politics of the Blockade (Kersplebedeb, 2020) (see here and here).

The Notes Taken is a collaborative blog dedicated to book reviews and occasional rants. We would like to present an informal venue to discuss and debate recent, and sometimes not so recent, literature in philosophy, politics, and fiction.